A Tribute to Delphine Bohall 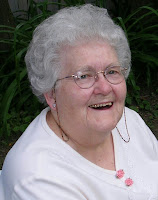 As I’ve thought about my mother’s life, the word courage comes to mind. My awareness of her bravery began in 1954 when polio threw her a curve. As she was being wheeled to an ambulance from Memorial Hospital in Niagara Falls on her way to Buffalo General Hospital, her longing eyes—her mother’s eyes—communicated deep sorrow over being separated from us.

There is no doubt that Delphine was courageous. Yet, she was susceptible to fear and to doubt; but courage served her well. In fact, my brother, Steve, recently discovered that those who have had polio often have a special kind of tenacity the rest of their lives. Delphine’s stamina and her fortitude allowed her to engage in her vocation as Mother. Indeed, her focus was on her family.

Throughout her life, Mother didn’t talk about courage: She lived it. The Lᴏʀᴅ’s message to Joshua, as he was about to lead the Israelites into the Promised Land, was pertinent to Mother: “Be strong and courageous. Do not be afraid; do not be discouraged, for the Lord your God will be with you wherever you go” (Joshua 1:9).

So, Mother’s courage prompted creative pursuits. First, her sewing career began around 1957. I remember her telling me after school one day that she had purchased a sewing machine, from a door-to-door salesman, with some money her grandfather Stevens had given her. For many years after that, she would use that investment to make clothes for her family. The shirts and ties are most memorable for me. She even made suits for Steve and me. My wife, Judi, remembers the clothes she made for our sons, Jeremy and Jonathan. Judi still wears a sweatsuit my mother made for her.

Mother also engaged in children’s ministry in two of the churches Dad served as pastor. She told me once that it was primarily for Steve and me that she developed the Christian Youth Crusaders program at the Pendleton Free Methodist Church. Through that ministry, we learned about the Christian faith, we developed friendships, and we gained life-skills. Mother even recruited Sue Federspiel, one of the nurses who cared for her when she had polio, to came to a CYC meeting and help us earn a nursing badge. I remember Sue teaching us how to make beds, hospital style.

Delphine’s vocation as a Mother took on a new dimension in 1969 when Leslie was born. There was no doubt in Delphine’s mind that she and Dad would love and nurture Leslie in their own home. No mother was more devoted to her daughter than Delphine was to Leslie. Yet, she and Dad knew that at some point others would have to care for Leslie; so, together with other like-minded parents, they formed the Faith Foundation so that Leslie would always live in a wholesome Christian environment. Mother’s contributions to the foundation included making craft items to be sold at fundraisers. Eventually, Faith Foundation merged with Heritage Christian Services and their dream for Leslie’s future became a reality. The beautiful home on Hoover Road in Sanborn opened its doors on June 3, 1996. It took another three years for Leslie to move to Hoover.

In 1998, Leslie purchased an iMac computer. Of course, Mother had to become familiar with it to help Leslie. In time, Mother would hone her computer skills at the Senior Center in Lockport. But after Leslie moved to Hoover in 1999, it made sense for Mother to purchase her own computer. I remember helping her pick out a PC and a printer in 2001. That equipment helped Mother express creativity and commitment to her family. Over time, she would archive a pictorial family history, produce all manner of greeting cards, and stay in touch with us through Skype.

Mother’s courage also came into play again in 2011 when she could no longer care for Dad with his Alzheimer’s disease. She called me one day and said, “I can’t do this any more.” So Steve and I helped Mother and Dad move to Gerry. The tough part for them was moving so far away from Leslie. But the Lord equipped the Heritage organizations and family members—especially Jack and Esther Robson—to bridge the gap between my folks and Leslie. Heritage Christian Services has always gone the extra mile (literally) to make sure that Leslie and our parents stayed connected. Heritage Ministries lovingly cared for Bob and Delphine; they generously extended hospitality to our family on so many occasions.

Finally, it took courage for Mother to come to terms with loss: In the last five years, she lost her home and her ability to walk. Eventually, her speech and her vision gave way. Last August, her husband of seventy-one years died. But she didn’t lose her family; and we used every means possible to stay in touch with her.

More importantly, Delphine did not lose her Lᴏʀᴅ: The love of the Lᴏʀᴅ—his mercy, his covenant faithfulness, his steadfast love—was ever-present, no matter what. And the love of her family and those who cared for her at Heritage Village was just one way the Lᴏʀᴅ expressed His love to her—even and especially during her final days with us.

Thus, this truth revealed by the Apostle Paul remained rock solid: “What will separate us from the love of Christ? Will anguish, or distress, or persecution, or famine, or nakedness, or peril, or the sword? No, in all these things we conquer overwhelmingly through him who loved us. For I am convinced that neither death, nor life, nor angels, nor principalities, nor present things, nor future things, nor powers, nor height, nor depth, nor any other creature will be able to separate us from the love of God in Christ Jesus our Lord” (Romans 8:35, 37-39, NABRE).

And as St. Paul wrote, “Our light and momentary troubles are achieving for us an eternal weight of glory that far outweighs them all” (2 Corinthians 4:17, NIV). Even the glimpses of glory Mother witnessed in this world are meager compared to those she is experiencing now with her Lᴏʀᴅ.

So, thank you, Mother, for being courageous. That was your way of revealing Christ to us.

For over forty years Stan has developed people and organizations through preaching, teaching, organizing, writing, motivating, and listening. He especially enjoys interacting with people in one-to-one and group settings.

Stan has a Master of Divinity from Gordon-Conwell. In 2012, he completed a certificate program in spiritual direction from Selah (http://leadershiptransformations.org/selah.htm).

Conversant with computer software and the Internet

Video-conferencing via Skype and other software

Stan led an organization that was on the brink of disbanding. Through his leadership it became a more vibrant cohesive group, optimistic about its future. He led its members in group activities. He also worked with its leaders to evaluate and update the organization's purpose, financial health, and organizational structure. As a result, the group became healthier, larger, and more outward focused and welcoming.

He led a group in a ten-week discussion of Tolkien's The Lord of the Rings. The majority of the participants read 100 pages per week to prepare for their sessions. He met with the group for two hours each week to discuss the contents, truths, and applications of this beautiful piece of literature.

For several years Stan led a multi-week training course for an organization. The purpose of the training was to help members understand and communicate the organization's core values with potential members. He recruited people to be part of the training, taught them how to clearly express the principles, and provided the means for them to be in touch with potential members. Leaders emerged from this training program, confident in their ability to communicate.

A Sampling of Favorite Films